Eradicating Ecocide – Rights for the Planet 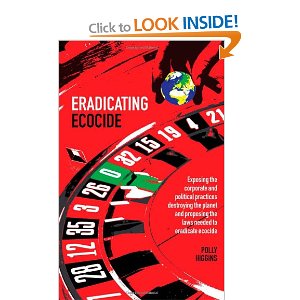 The neologism ecocide can be used to refer to any large-scale destruction of the natural environment or over-consumption of critical non-renewable resources. An early reference in 1969 described it as „Ecocide – the murder of the environment – is everybody’s business.“ Ecocide is also a term for a substance that kills enough species in an ecosystem to disrupt its structure and function. Another example would be a high concentration of pesticide due to a spillage. U.S. environmental theorist and activist Patrick Hossay argues that the human species is committing ecocide, via industrial civilization’s effects on the global environment. Much of the modern environmental movement stems from this belief as a precept.

In April 2010 UK Lawyer Polly Higgins proposed to the United Nations that ecocide be recognised as an international Crime Against Peace alongside Genocide, Crimes of Humanity, War Crimes and Crimes of Aggression, triable at the International Criminal Court. More

Polly Higgins is an international environmental lawyer. She believes that change can happen very quickly. She understands how law can act as a catalyst for global change.

Did you know that every government can implement laws overnight? George Bush used emergency laws to shore up Wall Street at the 11th hour and the UK have used them to pass laws on terrorism. It all depends on whether there is a national emergency. Well, now we have an international emergency. So we can do the same worldwide, and put in place an international law of Ecocide. In truth, it’s not that difficult. All that is required is for every nation to agree to vote on it, and then put it to the vote. It’s that simple. Really.

Proposed definition: Ecocide is the extensive destruction, damage to or loss of ecosystem(s) of a given territory, whether by human agency or by other causes, to such an extent that peaceful enjoyment by the inhabitants of that territory has been severely diminished.

In April 2010 a second international legislative proposal was submitted to the United Nations: for the crime of Ecocide to be implemented as a 5th Crime Against Peace under the Rome Statute.

The proposal of Ecocide as a crime of strict liability would impose a prohibition of environmental damage or destruction over a certain size, duration and severity to apply during peace time. To read more about the proposal, see thisisecocide.com

The Millennium Development Goals (MDGs) are eight international development goals that all 192 United Nations member states and at least 23 international organizations have agreed to achieve by the year 2015. They include eradicating extreme poverty, reducing child mortality rates, fighting disease epidemics such as AIDS, and developing a global partnership for development. More

Target 7A: Integrate the principles of sustainable development into country policies and programs; reverse loss of environmental resources

Target 7B: Reduce biodiversity loss, achieving, by 2010, a significant reduction in the rate of loss

The Convention on Biological Diversity (CBD), known informally as the Biodiversity Convention, is an international legally binding treaty. The Convention has three main goals:

1. conservation of biological diversity (or biodiversity);

2. sustainable use of its components; and

3. fair and equitable sharing of benefits arising from genetic resources

In other words, its objective is to develop national strategies for the conservation and sustainable use of biological diversity. It is often seen as the key document regarding sustainable development.

The Convention was opened for signature at the Earth Summit in Rio de Janeiro on 5 June 1992 and entered into force on 29 December 1993.

2010 was the International Year of Biodiversity. The Secretariat of the Convention on Biological Diversity is the focal point for the International Year of Biodiversity. At the 2010 10th Conference of Parties (COP) to the Convention on Biological Diversity in October in Nagoya, Japan, the Nagoya Protocol was adopted.

On 22 December 2010, the UN declared the period from 2011 to 2020 as the UN-Decade on Biodiversity. They, hence, followed a recommendation of the CBD signatories during COP10 at Nagoya in October 2010. More

193 countries agree on historic Nagoya treaty to save biodiversity, but US isn’t a signatory

Any action on climate change will affect international trade obligations that bind the U.S. and more than 150 other members of the World Trade Organization. http://www.forbes.com/trade-war.html

The UN biodiversity meeting in Japan has agreed a 10-year plan aimed at preserving nature.Targets for protecting areas of land and sea were weaker than conservation scientists wanted, as was the overall target for slowing biodiversity loss.

„Governments have sent a strong message that protecting the health of the planet has a place in international politics, and countries are ready to join forces to save life on Earth.“The meeting settled on targets of protecting 17% of the world’s land surface, and 10% of the oceans, by 2020.These are regarded as too small by many conservation scientists, who point out that about 13% of the land is already protected – while the existing target for oceans is already 10%.

After years of wrangling, most United Nations member states agreed early on Saturday in Japan to set significant new goals to reverse the extinction of plant and animal species. As part of the accord, they also agreed that rich and poor nations would share profits from pharmaceutical or other products derived from genetic material.

The negotiations among mostly environment ministers from about 190 countries in Nagoya, Japan, ultimately produced an agreement that had seemed distant just hours before the meeting ended. The agreement, known as the Nagoya Protocol, sets a goal of cutting the current extinction rate by half or more by 2020.

The earth is losing species at 100 to 1,000 times the historical average, according to scientists who call the current period the worst since the dinosaurs were lost 65 million years ago. The new targets include increasing the amount of protected land to 17 percent, from the current figure of about 12.5 percent, and protected oceans to 10 percent, from less than 1 percent. The protocol also includes commitments of financing, still somewhat murky, from richer countries to help poorer nations reach these goals.

Press Release: A new era of living in harmony with Nature is born at the Nagoya Biodiversity Summit.

This entry was posted by admin on 28. Mai 2011 at 16:33, and is filed under Ayurveda, Pflanzen&Gewürze, SAVE MOTHER EARTH, SPIRITUAL JOURNEYS, NEWS, TCM, Tai Chi & Health, Trad. & Indigenous Medicine. Follow any responses to this post through RSS 2.0. Responses are currently closed, but you can trackback from your own site.