« INSIDE OUT: a large-scale participatory art project
Live Webcasts from the Kalachakra Teaching »

Via Campesina „It is time to end the WTO“! 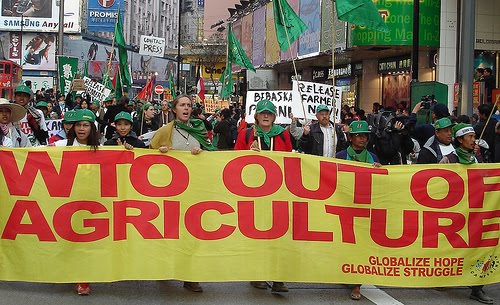 (Jakarta, December 16, 2011) The WTO ministerial meeting on December 15-17, 2011, is taking place at a time of a crisis of growth for neoliberal regimes worldwide. This crisis started in 2007 with the food crisis, which is still not resolved. Since the WTO was created 16 years ago, millions of people’s lives have been ruined. At the time of its inception, Europe and the US were in the forefront of the creation of this trade organization.

Opening the market by cutting tariffs and cutting subsidies that favored the people was at the core of the neoliberal policies pushed by the WTO. Their policies were peddled under the belief that all would benefit and the environment would be protected, as mentioned in the WTO’s mission statement. But the stark reality of the past 16 years have showed us otherwise.

Since the beginning of the Doha Round of negotiation in 2003 (also called the „Development Round“), La Via Campesina suspected that it would fail. There can be no development for the people under neoliberal policies.

Now people are marching and protesting in Spain, Italy and around the world, including the „Occupy Wall Street“ movement in the United States. The 2008 Wall Street financial meltdown, caused by years of deregulation and a lack of government oversight, cost Americans $14 trillion and eight million jobs. Today some 25 million people are unemployed or underemployed in the United States. Neoliberal policies such as those advocated by the WTO were born in Europe and the US, but they are now turning on their own people, creating a social and economical crisis of historic proportions.

Farmers need access to credit, a fair mortgage on their land, fair prices for the food they produce, and seeds that are not patented and owned by Monsanto or other big corporations. Consumers need to be able to purchase healthy and local food and earn a living wage, as Jim Goodman wrote in his article on „Occupy the Food System“ (http://www.commondreams.org/view/2011/12/12-0 ). He is a dairy farmer from Wisconsin and a member of Family Farm Defenders and the National Family Farm Coalition, a member of La Via Campesina in the US.

„The WTO is one of the neoliberal policies pillars – along with the World Bank and the IMF. The truth is that the neoliberal regime only benefits big transnational companies. Neoliberalism is nothing more than a corporate driven agenda” said Henry Saragih from Indonesia – general coordinator of Via Campesina.

In the WTO ministerial summit in Seattle in 1999, La Via Campesina stated on record that the neo-liberal agricultural policies were leading to the destruction of our family farm economies, to a profound crisis in our societies, and that they were threatening the very existence of our societies. The current global crisis shows that this analysis was right.

“Food sovereignty is our answer to our common challenges. Too many people are suffering as a result of the WTO’s policies. WTO out of agriculture and food has become a strong demand of Via Campesina from Seattle until now. The current global food crisis is due to the very fact that food trade is in hands of a few TNCs“ said Yudvhir Singh, a La Via Campesina leader from India.

During the climate talks in Durban last week, some efforts were made to include the WTO principles in order to solve the climate crisis. This move was clearly driven by the Neoliberal free market strategy of considering climate ( CAN International http://www.climatenetwork.org ) as a commodity. Free trade will not solve the climate crisis. The free trade regime has led to the accumulation of capital (and power) in the hands of a few and has allowed the destruction of climate for profit’s sake.

We saw at the last G-20 Summit in Cannes, France that the prevailing economic model was no longer sustainable. An economic model that is primarily designed to increase industrial and economic growth is no solution to the economic and environmental crises we now face. There is a need for a profound change in the modes of production and consumption.

We call on all governments, local authorities, national and international institutions to implement the concept of Food Sovereignty. Food sovereignty is based upon the people’s rights to feed themselves and to chose their own food policies. The implementation of those rights will allow peasants and small farmers to feed the world.

http://cesr.org/Time to address the economic and social rights deficit.

http://www.srfood.org UN Special Rapporteur on the Right to Food

#video Eco-Farming CAN Feed the World

Jean Ziegler: The Empire of Shame

The World Social Forum: Another World Is Possible!

This entry was posted by admin on 29. Dezember 2011 at 05:11, and is filed under Ayurveda. Follow any responses to this post through RSS 2.0. Responses are currently closed, but you can trackback from your own site.